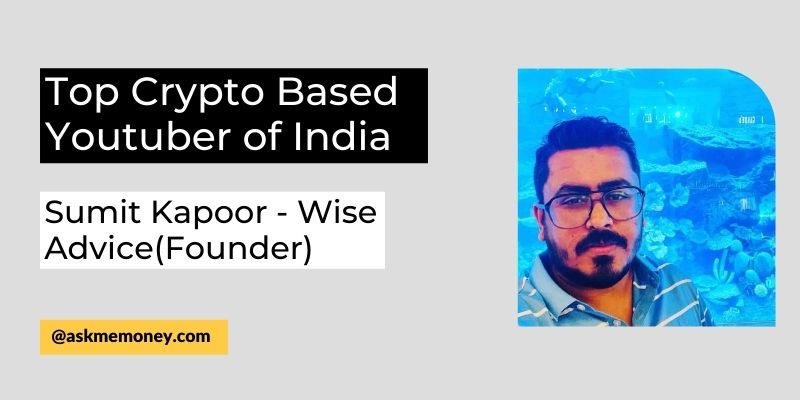 How did Sumit Kapoor actually become one of the top Crypto based Youtuber in India?

So far in India, there were discussions over the cryptocurrency transitioned from a strict banning of the digital financial products(Virtual Currencies) to a need of regulating it has made the global headlines, where on the other hand Blockchain influencers like Sumit Kapoor are hitting a new high.

He is already a globally recognized trader in digital financial products, Sumit Kapoor is a popular investment Guru with a large following with usually more than thousands of individuals waiting for his tips about investments as to where they should invest.

And why not Sumit Kapoor had gained a massive following of thousands on his Youtube channel ‘Wise Advice’ that ran into a few brand issues and copyright issues and further was taken down. It is very sad that 900 programs, and hours and hours of informative and educational material related to finance technology, and blockchain combined with digital currency, have been lost.

But he is a dedicated and an individual with never give up attitude that his great knowledge in this volatile, amazing, and innovative virtual currency market would be of huge value and core knowledge that could be useful for people. Already there are numerous talks that SEBI is likely to be handed over the task of regulating the Cryptocurrencies, a little relieved step than an outright ban on the instrument was called.

There are also speculations that the Government is also planning to bring the Cryptocurrency and Regulation of Official Digital Currency Bill, 2021, in the current winter session of parliament. The Bill seeks the creation of a facilitative framework that will aid the creation of the official digital currency to be issued by the Reserve Bank of India.

Sumit, who was nominated for the prestegious Binance Global Influencer Award 2021, and he is one of the Top ranked influencer in Asia and gives valuable insights, knowledge, and marketing advices on virtual currencies of the Digital Market. As a Youtuber, Sumit is very well known for his program, Wise Advice. Where thousands of followers awaits for a glimpse of the successful investor. And it is so essential to know that following his advice does make people rich.

If you look at it for the 31-year-old Delhi-based Youtuber, playing with numbers and understanding complexities of the digital market and its fluctuations proved to be a quick learning. His passion for video creation gave an edge to him as he went on a quest to educate his followers on a variety of subjects which are related to markets and trade in the year 2017.

His videos were focused mainly on Bitcoins, Crypto trading, Fiverr, Dropshipping, SEO, affiliate Marketing, forex, Blockchain and the likes. He used to give money-making tips as well.

He thinks that a person’s perspective distinguishes them from others and help them achieve great success. His half a million Youtube follower base is a true testimony of his success. Sumit Kapoor is popularly know as “Money Guru” in India.